Why I quit World of Warcraft

If you're reading this post, you probably have an idea of what World of Warcraft (WoW) is -- the most successful massively multiplayer online roleplaying game of all time. Blizzard claims more than 11 million subscribers (!) but the real number is estimated to be somewhere around 5 million (still !!!) To cut right to the point: I'm just not having fun anymore.

In WoW you make your character (toon) stronger by leveling up and getting better gear; you can do these things in PvE (player-vs-environment, like raiding and questing) or PvP (player-vs-player, where you try and kill other players' toons). Raiding is a large time investment; many semi-serious guilds raid 4 hours a night, 5 nights a week.

I used to be a pretty hardcore raider. I'm exalted with the Violet Eye; I was present for our guild's first (and server third) Magtheridon kill; I earned the Hand of A'dal title. But raiding is such a huge time commitment that I just don't want to do it anymore. Not only do you have to raid, but you have to grind for gold to repair, buy flasks, etc... and to be honest, most of our time inside of raid dungeons is spent waiting for everyone to click "Ready". Sitting around waiting for 24 other people isn't my idea of fun.

Anyway, I'm sure there are plenty of "why I don't raid" posts out there, so I'll leave it at that. I don't have the time, I'd rather be doing something else. Fine.

Enter PvP. The Arena seems like a great idea. 2v2, 3v3, 5v5 -- put a team together and try to kill the other team. But right now I'm really frustrated with it, and to understand why I'll give you a quick idea of how it works:

Each character can belong to one team of each bracket (2v2, 3v3, 5v5). Each team has a rating from 0-3000, and your character has a "personal rating" (PR), which corresponds to your best team rating (this was introduced in arena season 3 -- we're currently on 6). Each Tuesday, you are rewarded Arena Points, based on your rating, with which you can buy gear, with some restrictions.

[Warning: a lot of the links here are outdated and not accurate for the current PvP season, but the concepts contained on these pages are generally accurate.]

With each new arena season brings new, more awesome gear that you buy with Arena Points -- the caveat being that you must acquire a certain rating (both team and personal) in order to buy this gear. Each piece (head, shoulder, weapon, offhand, etc) has a different requirement. It doesn't matter if you have 5,000 arena points -- if you don't have an 1850 team & personal rating, you can't buy the newest weapon. This makes sense to me, as it rewards success with the ability to get the latest and greatest stuff for your toon, and you become correspondingly more powerful.

Now, the reason PR was invented was so that you can't just get invited to, say, a 2,600 rated team, buy all the cool gear, and then form your own brand new team and pwn n00bs with your powerful character. If you get invited to a 2k team, your PR starts at 1,000, so you still have to grind all the way back up -- there's no short-circuiting the system.

This whole system looks fine on paper. Competitive PvP with earned rewards -- perfect! Except in practice, there are some really major problems that make it majorly un-fun:

Yes, PR makes sense for all the reasons above. But in practice it becomes a problem: arena partners are impatient. If you're not online for a few days in a row, chances are that they'll quit your team and find someone else to play with. Conversely, if YOUR partner isn't on for some time, you'll probably replace them. That's ok, except when you invite someone to your team, their PR resets to 1k, and if you quit your team to join another, your PR resets to 1k. Good luck getting that gear!

Some character classes are just more powerful than others. I play a Human Warlock (affliction spec for 2v2), which means I wear cloth and most of my damaging spells are casted. As a result, I get TORN UP by melee classes, Rogues in particular. Rogues have the frustrating ability to lock you down (you can't cast spells while they stun you), and abilities that let them dispel all the harmful magical effects that are on them (Cloak of Shadows) and then vanish from sight. Frustrating. As a class with very little physical damage mitigation AND 100% magic damage, I'm basically helpless against Rogues. (Aside: Rogues have the same complaint vs. Hunters -- Hunters are adept at keeping their target locked in place while gaining a ton of distance from them. How can a melee class kill something he can't reach?).

As a Warlock, my main defense is Fear. I can set the enemy off running in a random direction and get them off me, giving me time to do some damage, receive heals, whatever. Problem is, there are a TON of ways to counter fear:

Noticibly, Rogues have no fear-specific immunities. That's because they can stun (and stun and stun) or otherwise disable you, or just turn invisible. And God help you if they're also Undead. Awesome.

It used to be that Arena matches would usually last 5-10 minutes apiece. It was more like chess: pressuring your opponents into a bad spot, taking advantage of a mistake they made and capitalizing on it for a win. Now, it's ZOMG DO AS MUCH DAMAGE AS POSSIBLE AND DO IT REALLY FAST. It's checkers. It's dumb.

This sounds like a big post full of whine. I know, whatever. QQ moar and all that. I'm not terrible; at the end of Season 3 I earned the Duelist title (awarded to Arena participants who place in the top 0.5% - 3.0% range in their Battlegroup at the end of an Arena Season). Not Gladiator (top 0.5%), but not terrible, either. Back then I spent a LOT of time playing the game, and things were a little better balanced... but not that much (it was mostly about picking an overpowered partner, a Druid in my case).

And more than that, it's mostly about the time commitment that I'm not willing to give. Between the awesome projects I'm working on at WorkHabit, the Drupal community work I try to do, and getting married next month, I simply can't justify spending 15+ hours a week on a computer game -- especially one I find so frustrating.

So that's it, the end of the line. My account's canceled and I'm moving on. I'm looking forward to the free time I'm gaining, and to be truthful, I've written this post to 1) remind myself of why I quit, and 2) keep myself honest (No renewing your account! You're done!). I wish I could say it was fun while it lasted, but it really hasn't been for the last few months. Why pay $15/month and spend all that time for something that isn't fun? Well, now I'm not. I hope for the sake of those who do keep playing that they work out class balance a lot better. Some day I'm sure they will, but today isn't that day. 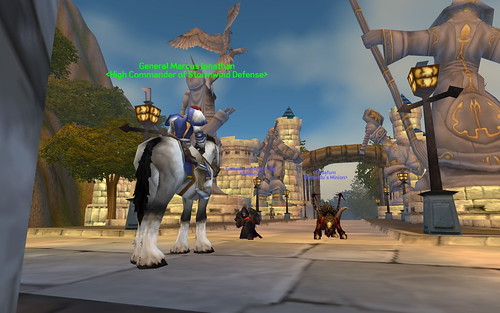